A Barefoot Pilgrimage in India 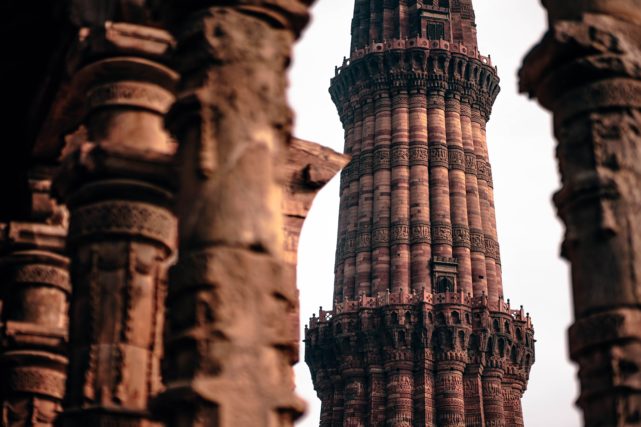 4,000 steps left until I reach the Jain temples atop Mount Satrunjaya.

Being an avid runner and hiker, this shouldn’t have fazed me. But I was attempting this pilgrimage in Palitana in the midday heat of the Gujarati desert, and for modesty’s sake, wearing what I wear everyday in India–a kurta (long tunic), churridar (legging-like pants), and a dupatta (scarf). Not exactly my ideal hiking gear. Also, I was barefoot.

I decided on a whim to take this weekend trip to the Palitana temples, mostly because the Google search pictures looked amazing but also because I’m fascinated by the diverse religious practices in India and how enmeshed they can be in everyday life. This particular complex of over 800 temples is a major pilgrimage site for people of the Jain religion, an Indian religion that operates on a doctrine of non-violence towards all living beings. I have a few friends who practice Jainism, but on the whole I knew very little about the religion before leaving on my trip.

A few people asked me how they could possibly know that I wasn’t Jain… umm, I think the frighteningly pasty skin and horrendous accent are dead giveaways?

After a cozy (re: sweaty and crowded) two-hour bus ride from the airport during which a few nice aunties befriended me and defended my honor against a creeper who was trying to hit on me, I checked into my guest house and wandered the town a bit. Most of the accommodations in Palitana are strictly for Jains, which I find very interesting. A few people asked me how they could possibly know that I wasn’t Jain… umm, I think the frighteningly pasty skin and horrendous accent are dead giveaways?

The next morning I woke up early to try and beat the heat for the hike. Then I fell back asleep, had a nice breakfast, and left about two hours later than I intended. At the starting point for the pilgrimage, there were tons of people offering their services to carry pilgrims up on a doli and selling sugarcane juice. After declining to be carried and taking a quick swig of juice, I started my way up.

The heat was oppressive (why, why didn’t I wake up to my alarm?), but I made some friends on the way up who helped me pass the time.

There was definitely a sense of camaraderie on the climb up, seeing men and women (and animals) of all different ages hauling themselves up this mountain. At times the ground would get too hot for my feet and I would step off for a break, at which point a stranger would usually offer me some water. The heat was oppressive (why, why didn’t I wake up to my alarm?), but I made some friends on the way up who helped me pass the time. Conversations went something like this:

Other person: Are you Jain?
Me: Nope.
OP: Why did you come all the way here?
Me: Well, the temples are supposed to be beautiful, and I thought it would be interesting!
OP: Yeah yeah. So you know a lot about the Jain religion?
Me: Oh, um, no actually. I know that Jains don’t eat onions, but that’s about it.
OP: [Laughter] Me: [I’m a joke]

A few blisters and a back-of-the-neck-sunburn later, I was on top of the mountain. Looking at the temple complex from above is incredible; I walked through all the temples for a few hours and was amazed by the intricacy of all the carvings and designs. More than that, I enjoyed being able to watch the different religious ceremonies that were taking place in and around the main temple.

It’s a humbling experience to be in the presence of so many people of faith who have come from all over the world for the same reason.

One family was nice enough to include me in their puja (a religious ritual), which included lots of beautiful songs and offerings of rice, fruits, nuts, coins, and flowers. In a way, it’s a humbling experience to be in the presence of so many people of faith who have come from all over the world for the same reason. I would’ve stayed up there all day but nobody’s allowed to eat at any point along the route up the mountain, so I was ridiculously hungry and had to descend. It was an experience unlike anything I had seen before, and I’m really glad I went.

Recently at a party back in Mumbai, I met a guy who told me he was a Jain. When I told him I did the pilgrimage at Palitana, he gave me a huge high five.