Confronting Parisian Myths in the City of Lights 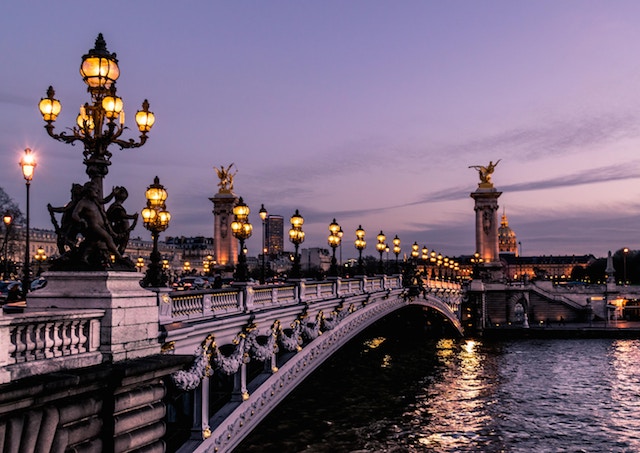 It’s important that you understand the romantic motivation behind my semester abroad in Paris. I went expecting to somehow fall in love, and I did…with the city. Don’t get me wrong. Paris isn’t all beauty and romance. There’s no doubt that Paris is in many ways a dirty place. The air is filled with the nicotine of a million Parisian cigarettes, and on the sidewalks you’re likely to see litter, dog droppings, and if you’re really lucky, public urination. On every block there’s at least one homeless person, likely accompanied by a dog, cat, or rabbit.

This way, you’ll feel twice as guilty if you don’t toss a euro into their cup. (It also prevents the homeless from being cleared out by police, as by law it would be animal cruelty.) If you bare any cleavage and are walking alone, someone is bound to make a remark or try to start up a conversation. And the “rude French” stereotype? Comes from Parisians. Like any city, Paris is rough around the edges…and I mean that both literally and figuratively. I avoided the city limits and suburbs of Paris like the plague.

But the City of Lights hasn’t lost all of its romance just yet. Here are some common opinions, rumors and myths about Paris that you may have heard, particularly if you’re preparing to study there; I’m going to tell you which are true, and which are a little more subjective.

Confronting Parisian Myths in the City of Lights

1. Paris is the most beautiful city in the world.

There’s no doubt that Paris is a living, breathing piece of art, a museum in motion, filled with history that one can’t find in the United States, simply because the countries of Europe are so much older. I haven’t seen enough cities to confirm this one just yet, but those who believe Paris is the best certainly have good reason.

2. Paris is the worst place in France to learn French.

This? Definitely subjective. Granted, it’s very easy to meet people who aren’t French— students, tourists, ex-pats, etc— but it’s all about how much effort you put in and who you end up meeting and talking to. Surprisingly, the person I practiced my French with the most was a Turkish girl, simply because it was the only way we could communicate!

3. Parisian students are much more serious; dorms are merely for sleeping and studying.

My orientation program absolutely stressed this point, but the truth is, dorms aren’t any quieter in Paris than they are anywhere in the US. You still might hear singing, small parties, and gossip, though if your dorm is anything like mine was, this may just be because the walls are so thin.

4. Paris is filled with markets.

Every district has a market or two. To find them, google the markets in your district, because most markets are only open a couple of days a week. Parisian streetmarkets sell everything; fruit, vegetables, meat, cheese, soap, jewelry art, and books. Oh, and just a tip- the best place for books is the Latin Quarter, near Notre Dame and along the Seine.

I did not see one beret in Paris, nor was there an overabundance of stripes…but scarves are always in, all over Europe and no matter the season! And you really will walk by people smoking cigarettes and carrying baguettes. I somehow managed not to pick up smoking while I was there, but no one can resist the allure of fresh French bread. Street performers are all over the city, and while they all do different things, you’re bound to catch at least one playing the accordion, especially near the bigger tourists attractions.

6. The best thing to do in Paris is walk.

I heard this countless times before I went to Paris as well as while I was there, and it was completely frustrating…but it’s true. There’s something for everyone on the streets of Paris, and what’s more is that you never know what you’ll find. I stumbled upon parades, celebrities, break-dancers, art shows, and more. Better to spend a day walking around Paris with no plans at all than rush through a tight agenda of places and events.

If you do need a plan, though, I recommend buying a set of cards titled “Walks of Paris.” A friend of mine had these invaluable things, and they tell you exactly where to walk, the historical significance of where you are, and the best places to browse or eat. So whether you’re studying, working, or on vacation, be sure to take the chance while you’re in Paris to go for a long stroll…the use of a map is at your discretion.

View all posts by Emma_Kinna