Forget Christmas – Mardi Gras season in New Orleans is the most exciting time of the year. Parades take place over two months, from Twelfth Night on the 6th January until Fat Tuesday in February. The parades consist of huge floats, marching bands, cheerleaders and dancers who trek for miles across the city. On each float there are people who throw things into the crowd. The most common throw is beads, some of which are personalized to the particular parade you’re at. You will find yourself coming home each day weighed down by as many beads as you can catch. After one night at the Mardi Gras parades, I came home to discover that I had bead-imprinted marks on the back of my neck. That’s commitment!

It’s difficult knowing exactly what to expect from your first Mardi Gras experience and it was definitely crazier than I had imagined. You find yourself becoming exhausted and all the parades seem to blur into one – but there are some parades that are not-to-be-missed. If you’re lucky enough to find yourself in New Orleans for the festivities, make sure to check these ones out!

Also known as The Sex Parade, held Downtown in the French Quarter. Expect throws of penis syringes and people trying to spank you – not one for the kids. This is one of the first parades of the season and it’s full of satire and sexual innuendo. For example, you’ll see pizza boxes with giant model penises inside, naughty schoolgirl costumes and a crew that call themselves the Spank Squad.

A dog parade inspired by Bacchus. The theme this year was Bark Wars (Star Wars): The Return of the K9. Dogs were dressed up as the likes of Yoda, Obi-Wan Kenobi and Princess Leia. This was an extremely cute parade, however it was full of tourists who kept crossing in front of the dogs and their owners – big faux pas. If you need to cross the road during a parade, wait for a significant gap; otherwise other people who are watching and those in the parade themselves will be very angry.

Possibly my favourite parade. It’s Uptown and all women. I was very happy to receive a little comic book as a throw, which told the story of how Muses were created. The floats are giant sparkly shoes and if you are lucky enough, you may be able to catch a shoe throw. However, I did witness grown men and women fighting over these shoes. It can get pretty nasty. This is a Downtown day parade, which was a lot of fun. There were throws such as toilet paper, plungers and sparkly cleaning brushes. My friend managed to get a free pair of sunglasses in the shape of toilet seats; they had flaps you could put up or down – just like actual toilets!

This is a Downtown parade with some of the biggest floats, including one with 260 riders! The theme this year was Fantastic Voyages – so floats included Gulliver’s Travels and Project Apollo. I had a great time, but the journey back Uptown was horrendous.

We left the parade early to try to get a bus and waited for over an hour before walking back to where the parade was (it had ended and there was just a sea of rubbish that looked like the apocalypse). We were afraid that we were going to have to do a five-mile walk home but luckily we managed to get a taxi. Seven of us squeezed in and we were charged $10 each, which was a rip-off but at that point we would have paid anything.

A popular Uptown parade to celebrate the Roman god of wine. Every year Bacchus has a different celebrity as the king, past Bacchus kings include Elijah Wood, Will Ferrell and Drew Brees. This year the king was John C. Reilly. Special coins are thrown out with images of the king on them.

Zulu was the last parade I went to. There are other parades that take place on Fat Tuesday (Mardi Gras day) such as Rex, which are also very good but I was sadly too tired and cold to stay out any longer. It was 2°C and my friends and I stayed up all night from Lundi Gras (Monday) to Mardi Gras. This is a tradition called Tequila Sunrise. The parades on Fat Tuesday start at 8am, so your best bet is not to sleep the night before.

I managed it by going to just one parade on Monday, Krewe of Orpheus, and when the parade ended and it started pouring with rain (thankfully I brought my raincoat!). We took cover in a church–that served food and alcohol–and then took the streetcar home.

After that, I had a three hour nap then awoke at midnight to make pasta, went to a bar called The Boot until 6am (at 5am they did $2 Tequila Sunrises), went home to put on as many coats as possible, and then took the streetcar to the parade with a quick stop off at McDonald’s for breakfast. By the time we got to the parade, people were grumpy from sleep deprivation and cold, and shoving each other to try to get coconuts. The costumes were amazing but I sadly didn’t last until the end of this parade. We managed to get a taxi home and slept for the rest of the day. 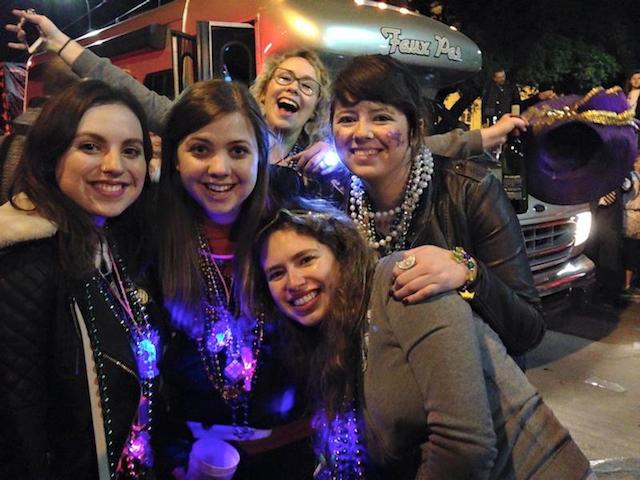 Have traveled to New Orleans? How was your trip? Email us at [email protected] for information about sharing your experience and advice with the Pink Pangea community. We can’t wait to hear from you.