On Honeymooning with Frogs & Bears at Algonquin Provincial Park 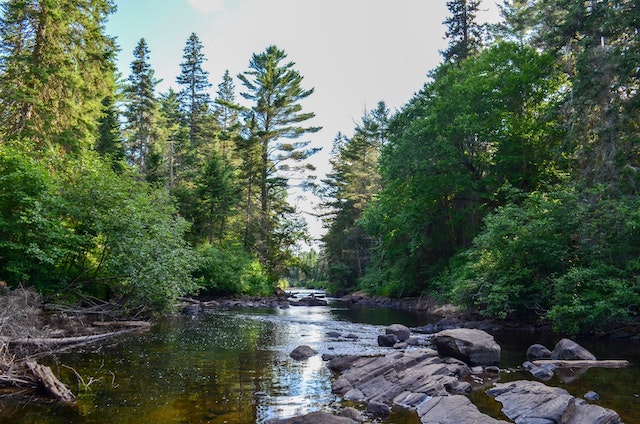 I woke to see my husband lying beside me holding a flashlight. He put his finger to his lips to indicate I should not say anything and I followed the beam of light. Just 3 feet from our heads there were 2 baby bears squabbling over our red, rubberized food bag. One got his head in it and the other pushed him away or dragged the bag so he was trapped and came up for air. Just then Mama Bear, about 3 times the size of the cubs, came in and batted one cub off to the right and with a swipe of her other paw sent the remaining cub hurtling off to the left.

She then proceeded to get her head in the food bag and got it stuck. We had a hard time trying not to laugh. She finally ran off with the bag over her head, taking no notice of us in our sleeping bag on the ground.

We spent our honeymoon canoeing and camping in the Algonquin Provincial Park in Ontario, Canada. The price tag of $21 (Canadian) for a week’s canoe rental providing us with transport and accommodation was very attractive. We didn’t own a tent, so bought a large sheet of heavy duty plastic – the type used for covering strawberries – which had the advantage of being waterproof and allowed for a different configuration for our home for each night.

However, with just one packet of rice-a-roni left on our last night we hadn’t gone to the trouble since there was no dustbin.

We were always careful to secure our food bag, with a loaf of bread and  an assortment of dried vegetables and camping dishes, either in the bear-proof metal dustbins which were dug into the ground at some of the camp sites or, if there wasn’t one, we hung the bag high in a tree. However, with just one packet of rice-a-roni left on our last night we hadn’t gone to the trouble since there was no dustbin. This was back country camping with no facilities.

Occasionally the rangers would have left a couple of tree stumps  to use for stools, and at one site I remember they had nailed a slice of a larger tree trunk to a stump to provide a table. There was usually an area with no bushes or trees around a firepit, and there were plenty of sticks around and under the bushes which could be collected for kindling. We only once had to share a campsite with another couple. Campsites were marked with orange on a tree by the shore. They were often on a headland or small bay on one of the lakes. There are hundreds of lakes in Algonquin which is an area approximately 3000 square miles of highlands where 5 different rivers originate. Canoe trail maps can be purchased at the supply store where we rented the canoe and stocked up with a week’s worth of dried and non perishable food. I was anxious to keep it as light weight as possible because I had to carry everything we needed over the hillocks between lakes. There were narrow dirt paths, but Mark could only carry the 80lb wooden canoe on his head holding up the sides with both hands.

So I wore a backpack with our clothes, including rain gear, insect repellent, sunscreen and other essentials for the week as well as a bag for the air mattress and pump, sleeping bags, the sheet of plastic and cooking pots, plates, mugs, utensils slung on one shoulder and the food bag which had a long strap across my body on the other side. I’m sure it all added up to 60 lbs.or more.

On the last morning as we climbed the hill behind our site to pick wild blueberries for breakfast, we found our torn, discarded bag and tiny pieces  of macaroni which Mama Bear must have spat out as she went up the hill. She must have liked the rice as there was no trace of it.

She must have liked the rice as there was no trace of it.

Earlier in the week when we were not yet sleeping, we watched an army of frogs of different sizes and shades of brown or green come hopping through since both ends of our “tent” were open. They must have been curious either about us or the strange plastic tunnel. They formed a single line, hopping at a steady pace set by the leader. They would have passed muster in any regiment.

We often paddled for 6-7 hours a day, breaking for lunch at some point when we usually had a swim. We ate oatmeal with blueberries for breakfast, a sandwich lunch with an apple if we still had any, and more blueberries which were in plentiful supply if not. We cooked supper in the evenings over the camp fire. We carried a saucepan to boil water for tea or instant coffee, using chlorine tablets in the lake water which was crystal clear. A small frying pan and one of those Japanese-style sandwich toasters that you can heat in an open fire were our only other cooking aids.

We loved to sit on the tree stumps or rocks after eating and listen to the loons calling to each other from one lake to the next, their calls echoing back from the hillsides. I was surprised there were not more birds. We had an occasional one join us for supper. We saw an impressive bull moose with enormous antlers one day drinking from the lake as we canoed down it, but saw very little wildlife otherwise.

We were fortunate that it only rained one day when we quit paddling early. It was warm enough in the late summer to paddle in swimsuits, so we did not have a lot of clothes to dry but we took refuge under our plastic shelter. We had occasional overnight showers. I remember one night when it was much colder, reminding us that fall was coming soon.

We noticed the first tinges of red leaves on some of the sumac bushes. The mist rising from the lake in the early morning was truly magical and Mark took a photo of our shadows silhouetted in the mist as we stood in front of the rising sun looking out across the lake. It was very romantic, a trip I’ll never forget.