On Biking Through Barcelona, Spain 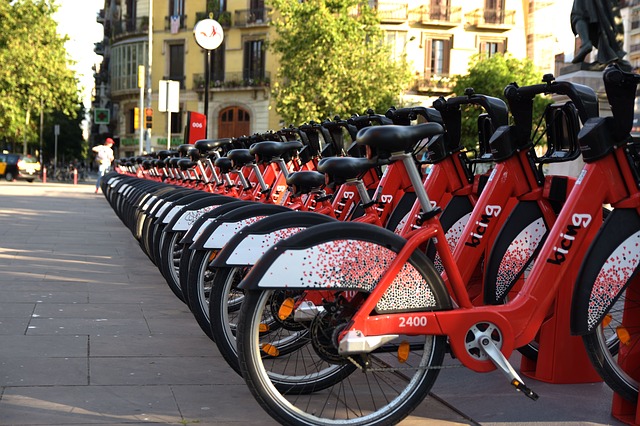 I’m fairly certain I fell in love with Barcelona the first time I visited; in fact, I think I fell while peering out the back window of a taxi coming from the El Prat airport. It was a clear night in November and I had the window partially rolled down. As we sped towards and into the city, I realized I could smell both the sea and the mountains. And that’s all it took. Two of my most favorite things – two of the most necessary things for my life – right the heck next to, in fact, almost in, a thriving, bustling, diverse city. I kind of felt as if I had found Mecca.

I’ve spent quite a bit of time in Barcelona over the years and I love it more each time. Most recently, I spent a too short week at the beginning of August. I stayed in the wonderful, quiet, residential area of Camp de l’Arpa, removed from the herds of summer tourists. The apartment was on the top floor and had a terrace. My plan was to rent a road bike, go biking in Barcelona in the mornings and early afternoons, then spend the late afternoons and evenings on the terrace writing and reading – my own little version of a meditation, feel like myself again, retreat.

I felt as if I had found Mecca.

I went to Terra Diversions to rent a bike. They rent mountain bikes as well as different levels of road bikes. They also do guided tours if you’re into that sort of thing. I had called the store the day before to set up my road bike rental of a carbon Canyon Ultimate CF. Xavi had my bike ready and waiting for me when I arrived. We did a quick bike fitting then talked about what rides I wanted to do. Terra rents GPS’s with about 20 pre-loaded courses on them. Xavi also provided me with laminated maps and a charger for the GPS (since I was renting the bike for multiple days). He talked me through the routes I was interested in doing, filled my water bottles, and sent me on my way.

The next morning I got up early as I like to do. I wanted to ride a 100K route that headed northwest out of Barcelona and into the mountains. The amazing thing about riding a bike in Barcelona is how quickly you find yourself on a smooth low-trafficked road heading up.

I turned inland from Badalona, heading towards Tiana. The route then turns toward La Roca del Valles, on to Orrius, then to Dosrius and the loop climb above it. Before the climb, I stopped at a gas station that is visible off to the right as you enter the town. There’s a café attached with a sign displaying a bicycle. I bought water and a coke and sat at one of the outdoor tables to rehydrate.

For me, who regularly rides in traffic in NYC, I was just happy that no one seemed to actually want to run me off the road.

After the looped climb from Dosrius and back, I continued on to Argentona, then back down to the sea. The last 20-25K of the ride is along a pretty busy double lane road that runs along the coast. The traffic does move fast and if you’re not used to riding in heavy traffic (there is a shoulder and it is a designated bike route) you might find this part a little disconcerting.

For me, who regularly rides in traffic in NYC, I was just happy that no one seemed to actually want to run me off the road. In fact, the drivers were all pretty courteous and there was no honking or yelling out of car windows to ‘Get off the Road!” Refreshing. And you can get in the drops and just go. It’s a long, flat, expanse of road. I met up with a guy out for a solo ride as well and we took turns drafting off of each other until we got back to the city. I finished the 100k and arrived back at my apartment by 2 – just in time for a siesta!

As I lounged on the terrace, I checked my email and found I had a message from a friend of a friend inviting me to join an ‘intermediate’ ride of ’30-40k’ with ‘not too much climbing’ at 6pm.

I figured out pretty quickly that the ride was most definitely not intermediate.

I met the group at the appointed time at Plaza Molina. They were all guys. Only 2 of the 12 that were there were Spanish. The group was a wonderfully eclectic mix of nationalities: British, Dutch, German, Russian, French, Serbian. We all spoke English. The guys led the way out of town and again I am struck by how quickly we end up away from traffic and climbing.

I figured out pretty quickly that the ride was most definitely not intermediate. Nor was it only 30 to 40K with little climbing. It’s hot and its hard and I am having a fabulous time hanging onto the back of these guys. I only know where we went by looking at the route on my GPS afterwards.

The ride was 75K with about 1135 meters of climbing. We did four climbs – La Vallensana, La Conreria, Ronda de Dalt, and Carretera de l’Arrabassada. The sun was going down as we started the last one and I was tired. I lost sight of the guys about a third of the way up. I worried briefly about not having any lights on my bike and how I would get home if they didn’t wait. “There’s always Google,” I thought to myself and pushed on.

As I neared the top, I was met with a beautiful sunset and the sillouhettes of 12 guys waiting patiently for me. I drank some water and waved them to start.

‘Its all downhill from here!” somebody yelled as we spilled over the crest to the other side. And indeed it was. A glorious fast descent all the way back to the center of town, laughing and yelling the entire way. Perfection.