Every year, over 200,000 people walk the Camino de Santiago for the most diverse reasons. For some, it is a spiritual quest or a religious journey. For others, it is a physical challenge. In my case, it was wanderlust.

In the end, every pilgrim who answers that call walks the same path–an 800-kilometre walk–and experiences everything that comes with it–from the charming towns to the unexpected blister; the closed albergue; and the soil that turns into mud, heat into snow, plains into mountains, and mystic trails sided by white-flowered trees into long never-ending roads. However, despite sharing the same physical and psychological challenges, every pilgrim learns a different set of tailor-made lessons. These are a few of the lessons I’ve learnt on the Camino de Santiago:

As our feet sank deeper into the snow, my fellow Korean pilgrim shouted at the skies, “Come on!” None of us had the right shoes to hike across snow-covered mountains, and yet it was our second day doing it, reaching a maximum speed of two kilometres per hour. On the first day, I shouted too. But I couldn’t do it anymore.

“At least here, I am not afraid of dying,” I replied with a smile. He looked back. The agony I felt when I slipped down the mountain and almost fell to my death before a tree saved me, was still reflected on my face.

He smiled, “You are right.” Whatever the situation, we have all been through something worse. And if we have not, then someone else has and if that person made it, you can, too.

2. “The Camino doesn’t make you stronger; it only makes you realise how strong you are.”

Those words were written on a piece of paper stuck to a yellow wall in an empty albergue. The albergue was shut, and the next albergue was four kilometres away. We had no choice but to keep walking in the dark across the Spanish plains. One of our flashlights guided the way. The other, strapped to my head, blinked backwards in an attempt to let occasional drivers know that a Latvian, a Portuguese and a Hungarian pilgrim were still on the road.

“The big building on the left looks like a giant cartoon of milk,” one of us shouted.

“The lower one beside it looks like a tea pot,” another added.

We laughed hysterically. It wasn’t that funny, but after walking for over 12 hours, with only 10 minutes left before the next public albergue closed, we had nothing left to hold on to but our laughter.

“Look! Carry On!” one of the girls shouted.

“No one is carrying on anywhere!” I shouted back as my eyes met the white sign with the black words “Carrillion (de los Condes).” It seemed that 47 kilometres later, we discovered that we were stronger than we ever realized. 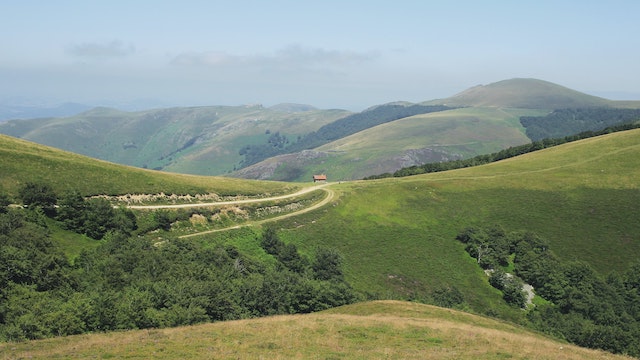 3. You are always where you are meant to be.

It turned out the alberge was a nunnery, and that the nice nuns were about to close the doors as we rang the door bell. “Oh my God, it’s so late. Were you not afraid?” one of them asked.

“Only of sleeping outside,” I answered quickly.

“Come, let’s check you in and I will take you to your beds.” As she took us up the stairs, she added, “Many pilgrims arrived today, but we still have three beds in one of the dorms.”

The excitement kicked in. We had walked so far, constantly on the lookout for other pilgrims who had become “family” in the last few days. And there they were, receiving us with tight hugs, kisses, laughter and three beds waiting for us in our family dorm. Some might say it was a coincidence, one of many. But what if those moments when our lives and paths align perfectly with everyone else’s is a synchronisation to let us know that we are where we at meant to be.

4. Sometimes the weight is not psychological.

The following day, after walking 17 kilometres in a blizzard with one quick stop along the way for hot soup, there was rain. My backpack slowly started to sink into my shoulders, and although the rain cover provided shelter for me and my backpack, my feet began to slow down.

“Weight is psychological,” I repeated to myself. The hospitaleros had told me that sometimes, it is not the weight of our bags, but the weight inside our minds that slows us down.

“Finally,” I thought when I arrived at the next albergue. “Time to get into my pyjamas!”

But, as I removed the grey so-called waterproof cover, I found that the weight was real! Sometimes it is hard for us positive people to be realistic. Most of the time, we want to see the cup half full, when really, it may be time to fill the glass.

As I hung a line across the room to dry my clothes, I spoke excitedly about all of the challenges we had faced together and individually during the previous days. There had been mountains, mud, shut albergues, pilgrimages in the dark, snow and now rain. “Every day, life is a challenge,” I concluded.

“Can you stop talking about the challenges? We are walking at the same pace. Everything you go through, we go through,” said another fellow Hungarian pilgrim.

“Okay, then,” I replied, smiling. “It’s not the Camino of challenges anymore; it’s the Camino of bliss.” He smiled. A day can be whatever you what it to be, depending on how you look at things. On some days nothing will stop you, while on others, everything might bring you down. But in the end, just remember: a blister only hurts if you focus on the pain.

6. Life gives you what you need, not what you want.

“I kept meeting the same geeky guy for days. Whenever I arrived at an albergue, there he was. It was just him and me all the time, and we ended up becoming really good friends,” said the Australian pilgrim. We were only a week or so away from Santiago and she had started the Camino before I did, which meant that at some stage I – and hundreds of pilgrims – overtook her. Maybe while she was at a bar or resting in a private albergue. I smiled.

When I started the Camino, although I was open to anything that could happen, I hoped to could spend a lot of time alone in nature. But the downfall of having a bubbly and chatty personality is that you can only truly be quiet if there are no interesting people around. But I kept bumping into the most interesting people from different countries and walks of life, and they kept meeting each other too. I was hooked, and so were they.

Sometimes you want loneliness, but what you need is a good friend. Other times you want a friend, but all you really need is to spend time in silence. Just embrace what life wants to give you–it’s what you have right now.

Ana, my best friend who joined me for the last 300 kilometres, and I were just a few days away from Santiago. That day we decided to take a short detour and visit a museum, along with two other pilgrims. The museum had dozens of colourful works of art made from local stones that had taken decades to put together. The artist’s son showed us around.

“Would you like to know what your totem animal is?” he asked.

“Sure,” we agreed. One by one we went in and then shared what we had learned.

“My card didn’t give me any instructions,” I told the others.

“Maybe you should stop looking for instructions and be what you have learned,” said the son of the artist before anyone else could comment.

So many of us spend so much time searching for who we are, discovering our dreams, and figuring out how to pay the bills that we actually forget to be who we are as a result of the lessons we have learned.

Have you walked the Camino De Santiago? What where your impressions? Email us at [email protected]pinkpangea.com for information about sharing your experience and advice with the Pink Pangea community. We can’t wait to hear from you. From the age of 9, Sandra knew she wanted to be a journalist who walked on different lands, who heard different stories, who ate different foods – a stranger in a strange land who would live between the edge of the unknown and cultural ecstasy and then share it with the world, keeping the known closer and the unknown closer.

View all posts by Sandra Guedes