I Rediscovered My Love of New Places in Montevideo, Uruguay 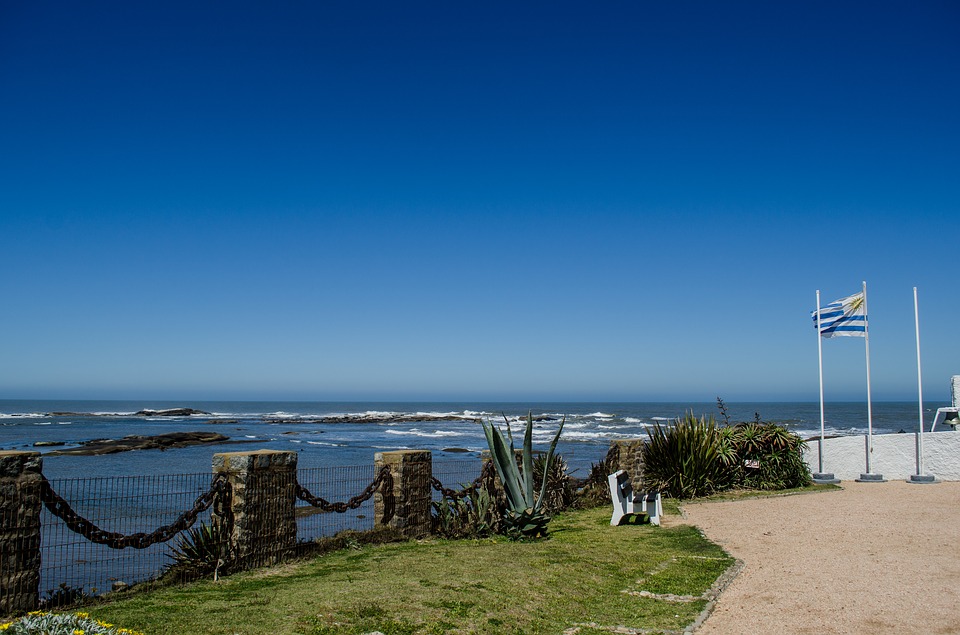 My friend Poe’s mother slapped a jar of dulce de leche on the table. I was sitting with her family in her parent’s kitchen in Montevideo, Uruguay. We had just finished a steak meal her dad had grilled over an open flame. The meat was so lightly spiced, yet so flavorful. Her mother gave each of us spoons. I saw Poe take the lead. She dipped hers in the jar and took out a big, goopy glob of the caramel-like sauce.

“We’re informal here,” her mother explained as we all took turns scooping out portions to satisfy our post-meal sweet tooth. I smiled. I couldn’t have felt more at home. It was the most comfortable I had felt in weeks.

It was my first time being on my own and out of the country for so long.

Two days earlier I had taken the ferry from Buenos Aires to Montevideo to visit my friend Poe. I was a month into what would be my year-long study abroad in Argentina. When I left the U.S., I was charged with high expectations. I was feeling brave, motivated, and optimistic. It was my first time being on my own and out of the country for so long.

I was so grateful to have gotten the chance to fulfill out my long-awaited dream of living in a Spanish-speaking country. I was so scared of admitting to anyone that it wasn’t as easy as I had imagined to suddenly transplant into a new home.

Not to mention that there were other factors and new experiences that I didn’t know how to handle. Suburbia never taught me how to take public transportation. Eating at my college dining hall made it easy to avoid learning to cook. I was blundering through the cultural differences of living with a young Argentine actress.

I was so scared of admitting to anyone that it wasn’t as easy as I had imagined to suddenly transplant into a new home.

And then, I stepped away from building my “study abroad experience,” with all of the assumptions that that phrase carries. By the time I reached Montevideo, I didn’t realize how taxing it had been to try to adapt to a new country and to pretend like I was content with every step of it.

When I stepped off the ferry, Poe was there, wearing a yellow leather jacket and sporting her new purple-highlighted hair. She gave me a giant hug and said bienvendia a Uruguay (welcome to Uruguay), and I felt a surge of optimism.

From my perspective, Montevideo felt similar to Buenos Aires (Uruguayans don’t kill me!). But Montevideo felt like the kinder, friendlier, more gentle Buenos Aires, boasting the same charming qualities as its cousin but leaving the bad attitudes, impatience and judgement at home.

And my host was as welcoming as the city I was visiting. Poe was the kind of host that took the time to explain every detail. She thought of methods to approach different topics in a way I would understand, and she answered questions I didn’t even know I had. Even though we met in the U.S. and our relationship had previously been in English, she spent the weekend patiently listening to and helping me with my Spanish.

I didn’t realize how taxing it had been to try to adapt to a new country and to pretend like I was content with every step of it.

I stuffed my face with Martin Fierro dessert at her parents’ house. We held on for dear life on carnival rides blasting rock music with the teenagers of Montevideo. We stayed out all night dancing to cumbia at the agricultural exposition at the Rural del Prado. The next day, we woke up at 2:00pm. We spent Sunday morning roaming through the Tristan Narvaja market and admired the potentially stolen goods for sale. Sitting outside in the sun at a restaurant in El Mercado del Puerto, we savored melted cheese and pasta.

Montevideo had presented me with new flavor that was only this delicious when accompanied by the presence of a caring friend. Dancing to cumbia helped me get over the embarrassment of feeling alone and of not being able to hold it together in front of my study abroad advisor. Her widening eyes and deep breath led me to believe she wasn’t sure of how to handle my exploding tears (If cumbia villera endowed any wisdom onto me, it would be “be who you are, and own it”). The people in Montevideo that I met taught me that, unlike after my four-hour class at the University of Buenos Aires, I could fearlessly be immersed in Spanish without a headache.

The weekend I spent with Poe and her family was like a 48-hour hug from your mother after a horrible day. Having left the uncertainty I felt in Buenos Aires, it only took a few genuine moments to build my confidence. It restored my love of new places, of meeting new people, and of course, the Spanish language. I ended up falling in love with Buenos Aires, but it took some getting used to. After Montevideo, I returned with a fresh attitude under my belt and embraced the following months.