Learning to Love My City Again 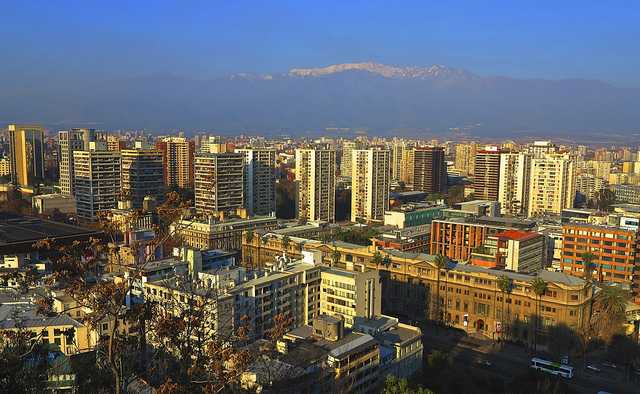 Have you ever made yourself a promise, and, confidently, naively, felt sure that you’d never break it? When I moved to Santiago, Chile, I immediately fell for the city. Part of it was the newness of it, the sheer multitude of possibilities waiting for me to discover. But part of it was the city itself—the charm of the various and distinct neighborhoods, the friendly people, the breathtakingly formidable Andes looming on all sides. Whatever it was, I was optimistic that I wouldn’t—no, couldn’t—possibly grow tired of it. I, of course, was wrong, and it wasn’t until I acted as a host to my best friend that I came to terms with my city—the good and the bad.

I was not long in Santiago when I noticed that Chileans I met, and even more so seasoned expats, expressed disdain with various aspects of the city. But being the bright-eyed new resident that I was, I couldn’t understand how they could say such negative things. I was in the honeymoon phase with my city, blindly and blissfully learning about it, eagerly taking it all in. So there was some smog, and rush hour was miserable, and bureaucratic processes were a never-ending nightmare to complete, but it couldn’t be that bad, right? I was sure living in a cosmopolitan capital city on another continent would make all of that worth it. I brushed off their complaints as cynical, with faith in my abilities to be optimistic and to adapt.

Once the newness faded, once I’d visited all of the major touristy areas, once I’d experienced the daily drudgery of life here, I felt disillusioned.

Of course, it was only a matter of time before I realized how silly and naïve I’d been before. Once the newness faded, once I’d visited all of the major touristy areas, once I’d experienced the daily drudgery of life here, I felt disillusioned. I didn’t want to dislike the city, but I did. I didn’t like the smog, and how my face reacted to it by sprouting acne like it never had before. I didn’t like the jostling and cramped (and in the summer, sometimes putrid) trips on the metro. I certainly didn’t like the immense amount of time and effort and waiting in lines it took to become an official resident. I found fault with Santiago for not having the exquisite beaches of Rio de Janeiro, nor the rich culture and architecture of Buenos Aires, nor the intriguing history of Cusco. In just six months, I had become as disillusioned and disappointed as those I’d dismissed earlier on for being too cynical.

All of this was coming to a head just as my best friend’s visit to Chile was fast approaching. I eagerly awaited her trip, yearning to see her, and excited for the piece of home, familiarity, and comfort she embodied. Yet, I felt uncomfortable, knowing that I would be showing off my city just as I was becoming frustrated with and bogged down by its faults.

Finally, the day came when my best friend arrived, and we spent days exploring the city—the major tourist hubs, an historical walking tour, my favorite spots. Most of it was familiar to me, areas I frequented for work, the backdrop to my nights out with friends, my day-to-day scenery. Yet, for her, everything was new, from the city’s eclectic neighborhoods to the view of the Andes from my apartment to the mundane facts of everyday life (just a simple trip to the grocery store, for example, can be a shocking experience for those of us who are accustomed to seeing milk and eggs refrigerated).

Watching her become enchanted with Santiago, I remembered my own first few months in the city, how much I adored it and how grateful I was to be here. I still don’t like the smog, I still do everything I can to avoid the metro at rush hour, and I still am baffled by the sheer amount of time and paperwork it takes to get things done here. But none of those things, nor my frustration with them, mean that I can’t also adore where I live. Just because Santiago isn’t new does not mean that it’s not an exciting, wonderful place to live. When I get frustrated now, I look up or around myself, admire the snow-capped Andes, and remember how glad I am to be here.

Courtney is a dog-lover, adventure-seeker, bookworm, ballet dancer, and aspirational yogi. An English teacher living in Santiago, Chile, she cherishes opportunities to meet new people, to try new things, and to learn about the world.

View all posts by Courtney Sanders