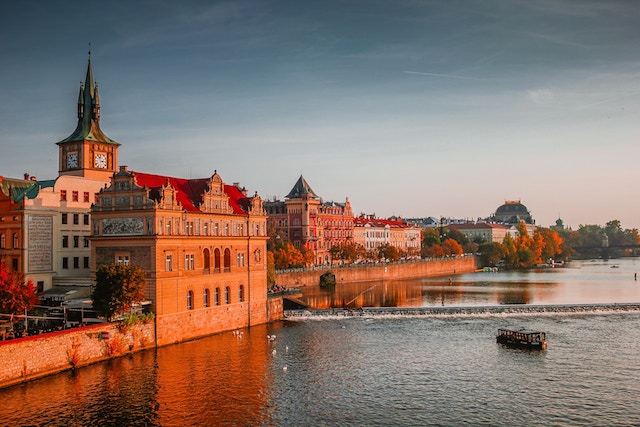 I’ve wanted to travel all over the world since I knew there was a world outside my tiny hometown. Particularly, I dreamt about studying abroad in the Czech Republic. I’ve been fascinated with its capitol, Prague, ever since I was sixteen. I read The Metamorphosis, a famous short story by Czech writer Franz Kafka, the summer before my junior year of high school. Soon after, I read his entire repertoire: the rest of his short stories, novels, and even prose.

I learned every inch of his personal history, including his relationship with his hometown, Prague. There are traces of his legacy found all over the city, including his gravesite, several statues, and a museum dedicated to his life and work. Eventually, his writing inspired me to study literature in college.

As a young opportunist, I saw this as the chance to finally reach the city of my dreams. During my first semester of college, I conducted some research and surfed the web for potential programs. While comparing these different programs, I learned the harsh reality of going abroad: the price tag.

According to Fox Business, it costs nearly $18,000 on average to study abroad for a semester, which is more than the cost of a semester at my home institution. I still cringe today at the cost of the posh Semester At Sea program, that starts at $23,950. With these expenses, study abroad was impractical and unimaginable.

The scholarship that changed everything was one I didn’t apply for.

Let’s rewind for a moment. I come from a low-income household. I also identify as a first generation college student. (Both my parents attended college, but never graduated.) With scholarships, student loans, and several part-time jobs, attending my home institution—a public liberal arts college—is expensive enough.

Comparatively, college in a foreign country appeared to be even more of a financial burden. Like many college students from both lower and middle class backgrounds, I simply couldn’t afford it. I thought only the “rich kids” had the opportunity to study abroad.

Fortunately, I was wrong. I write this story as a study abroad alum. I’ve studied abroad for a three-week summer session in the Czech Republic (Yes, I made it to Prague!), and a semester in India. I’ve also participated in a weeklong Alternative Spring Break trip to the Dominican Republic and presented research at an academic conference in Canada.

In fact, I’ve even been inducted into my college chapter of Phi Beta Delta International Honor Society, which recognizes scholarly achievement in international education. Here’s my story.

Throughout my undergraduate career, I had to work several part-time jobs with a full course load. Walking away from any of these positions, even during the semester at home, seemed like a stretch. I supported myself financially. I paid my own tuition, groceries and everything in between. Later this year, I’ll have to start paying off student loans on my own.

Fortunately, there are ways to work around these obstacles. If you haven’t checked it out yet, Brook Thomas, a writer within the Pink Pangea community, wrote an outstanding piece on How To Study Abroad For Free. I echo her advice. I applied for study abroad scholarships left and right, researched exchange rates, and everything under the sun.

However, the scholarship that changed everything was one I didn’t apply for. During the end of my second year, my academic advisor nominated me for a prestigious scholarship offered through my college’s foundation. She recognized my tremendous campus involvement. I kept myself busy when I wasn’t studying or working.

The summer following my sophomore year, my academic advisor notified me that I had won the scholarship. It all came as a surprise. I hadn’t even know she nominated me at all. The award amount turned out to be enough to fund a summer study abroad session in—you guessed it—Prague.

I presented research at undergraduate conferences through the Honors program; wrote for the newspaper weekly; served on several e-boards in clubs; organized voter registration drives on my own; attended Model United Nations delegations every semester; on the weekends, helped give campus tours at Open Houses for prospective students. The summer following my sophomore year, my academic advisor notified me that I had won the scholarship. It all came as a surprise. I hadn’t even know she nominated me at all. The award amount turned out to be enough to fund a summer study abroad session in—you guessed it—Prague.

I applied for study abroad scholarships left and right, researched exchange rates, and everything under the sun.

Because it was already late to apply for a summer program that year, I went through the process my junior year. I successfully left for Prague last May and returned three weeks later. During my stay, I curated my own walking tour of Prague, oriented around where Kafka worked, lived, and attended school. On the weekends, I traveled to Paris and Copenhagen. The experience was unlike anything I’d ever imagined. I still get chills when I talk about the trip nearly a year later.

Thankfully, my story doesn’t end in Europe. After such a positive experience in Europe, I wanted to do anything I could to pursue a semester-long program. I ended up studying abroad for three-and-a-half months in Bangalore, India during my last semester of college. Similarly to my other study abroad program, I received the right amount of scholarship support to make it happen.

I just returned at the end of last month, and I’m still experiencing reverse culture shock. I never thought I’d find myself in South India a year ago, when I was packing for Prague. (Senior year isn’t too late to study abroad, even if it’s your last semester!)

I proved myself wrong. Studying abroad wasn’t just for “the rich kids.” I managed to reach not only the city of dreams before I graduated, but also, a country I never thought I’d ever live in. Likewise, I encourage all women in higher education to pursue the possibility of studying abroad. Start your research today and get involved with your college campus—you never know who’ll nominate you for a scholarship.

How to Study Abroad for Free

Have you studied abroad? Did you enjoy your experience? Email us at [email protected] for information about sharing your experience and advice with the Pink Pangea community. We can’t wait to hear from you.